You may have known the Federal Reserve System was created in 1913, but did you know many of the Federal Reserve buildings are nearly as old — and still in use today? Read on to learn about the history and unique architecture of four such district offices.

At the time of its opening in 1924, the Federal Reserve Bank of New York head office was the largest bank building in the world. Samuel Yellin, chief architect, took inspiration from many famous Italian structures, which is reflected in the building’s stonework and arches. It took over three years to complete construction mainly due to the high-security basement vault that rests on the bedrock of Manhattan Island 80 feet below street level. As of 2019, the vault housed approximately 497,000 gold bars, with a combined weight of about 6,190 tons. You can discover more interesting facts on the Museum & Gold Vault Tour (Off-site) page. 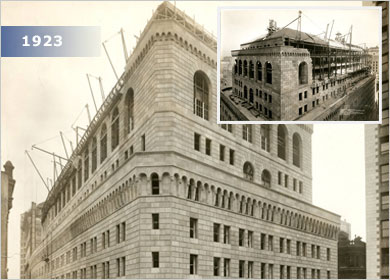 More than 40,000 community members attended the grand opening of the Federal Reserve Bank of Cleveland in August 1923. The firm, Walker and Weeks, was hired to design a building that communicated soundness, safety and promoted trust in the institution. The pink Etowah Georgia marble matches that of the Beaux-Arts character of neighboring buildings, including the Cleveland Public Library. The building was also inspired by modern Italian design, much like the New York Fed. Decades after its opening, the Cleveland Fed’s Learning Center and Money Museum (Off-site) continue to attract thousands of visitors each year. 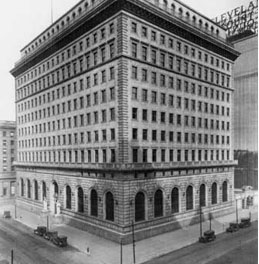 The 17-story Federal Reserve Bank of Chicago building finished construction in 1922. At the time of its opening, the building was hailed as an architectural marvel, complete with an innovative intercommunication system and one of the largest vaults ever built. The building’s front façade displays 65-foot Corinthian colonnades, like those of Shedd Aquarium and Merchandise Mart in Chicago. These were all designed by the same architectural firm of Graham, Anderson, Probst and White. Today, you can marvel at many items inside the Money Museum (Off-site) including a million-dollar cube and a money pit. 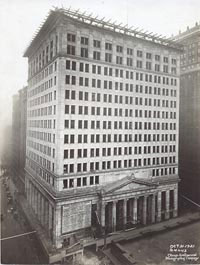 The Federal Reserve Bank of Dallas home office opened for business in 1921 and has since been designated as a historical landmark. Designed in the Beaux-Arts style, the building is constructed of limestone with large columns and carved detailing. As the district grew, the office needed more space to operate, so, in 1992, the bank relocated to a 250,000 square foot building in a nearby area. In 2000, the original building was renovated as a datacenter — The Databank Building — taking advantage of security features from its use as a banking facility. Today, data and security remain top priorities for the Federal Reserve and for the Dallas-Fort Worth Federal Statistical Research Data Center (Off-site), which is housed in the Dallas Fed building. 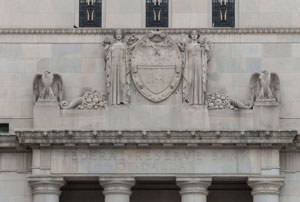